Michael Sommer, Artistic Director of the German Part of Phone Home, writes about the general purpose of the PHONE HOME WORKSHOPS.

I’m a big fan of pebbles, except on beaches, where I prefer sand. Otherwise, however, pebbles are fantastic: You need to find your way home out of the forest, because your parents haven’t picked you up as promised? Follow the pebbles. And, of course, pebbles are the material of choice for mosaics. They come in all forms, colours and surfaces. I hope you pardon this little eulogy of the common pebble, but they are really the objects we’re after in the research phase of PHONE HOME. 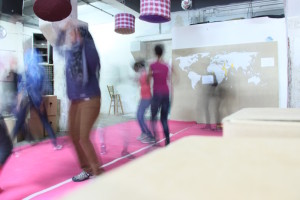 Fifteen or so people meet in a theatre space. Some of them have spent their whole lives in Germany, others have only been here for weeks, days or even hours. The age span varies between 8 and 60, the background is as colourful as can be, half a dozen languages are spoken here, but none by all. A plastic ball in the form of a globe is thrown around, people try to pronounce and learn each other’s names. Very simple, very basic theatre games follow: The classic “impulse circle” (passing on claps, gestures, sounds), imitation games that inevitably lead to contagious laughter, dance and improvisation. Again and again the common endeavour to understand what a game is about, the chatter in one of the many languages, as one of the participants is trying to explain how she thinks this works, attention being distracted by many things, but finally, understanding dawns, it works, we move harmoniously, there’s a flow, we have fun, there is excitement, laughter, applause. 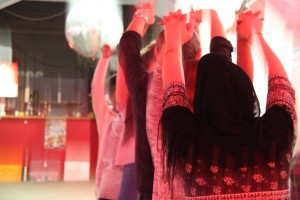 After the basic games, everyone is invited to give creative input – “What three objects would you take on a journey to another planet?” / “What is your favourite song?” / “What is a beautiful landscape for you?” / “How do you greet people in your native language?” / “How would a monument of welcome look to you?”. We find creative translations for these contributions – we improvise scenes, pantomimes, dances, music. This is not about elaborate stories, it’s about the challenge to understand each other on a very basic level. And, of course, about collecting little bits and pieces of dreams, memories, ideas – pebbles that the participants of our workshops share with the group. Those pebbles are the seed for the artistic phase of our project, in which we will create a theatre performance in the form of a mosaic, that will grow out of the encounters and experience we collect now.

Naturally, pebbles from the UK and Greece will look very different from the ones we are collecting in Germany, at the moment, so we’re trying to update each other as we go along, and collate the experience and material in a joint artistic workshop in April 2016. This will form the base for the development of our performance that will be presented in an interlinked performance in London, Munich and Athens. We will play on three stages in three countries simultaneously; the theatre spaces will be connected to each other via video conferences. Additionally, the performances will be livestreamed.